Last week, I took a bag of frozen raspberries out of the freezer to thaw. There must have been a hole in the bag, because the next morning there was bright red juice all around the bag. It had even dripped off the edge of the counter and puddled on the floor. At first glance, it looked like a homicide crime scene.

I would have taken a picture of it, but WHY WOULD I? It’s not like I was planning to blog about it.

Luckily, I’m a great writer and adequately described the mess so you have a picture in your mind. Right?

As I was cleaning up the mess, I was thinking about how glad I was that the juice wasn’t oil-based. Sometimes I chuckle at myself, because only a DIYer would be comparing raspberry juice to wood stain or paint. 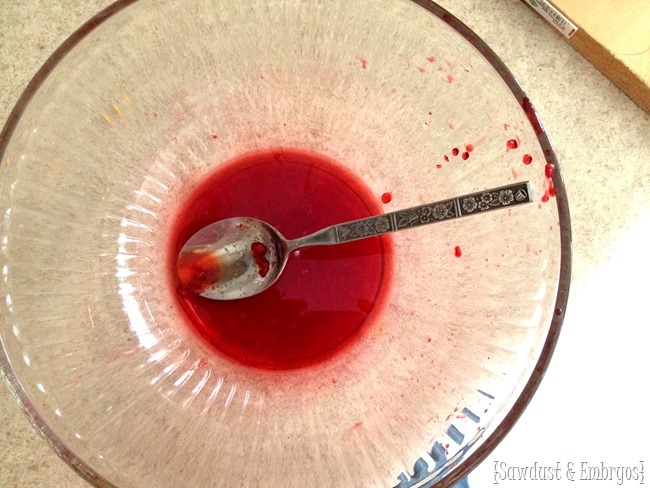 AND THEN IT HIT ME.

I couldn’t do anything else until I found out if I could use my trademark ‘Shading with Stain’ technique with raspberry juice. I ran out to the garage and grabbed a piece of pine, hand-sanded it real quick with 220 grit, and sat down with the girls at the breakfast table. They ate their oatmeal (with raspberries in it) and I stained with the leftover raspberry juice. 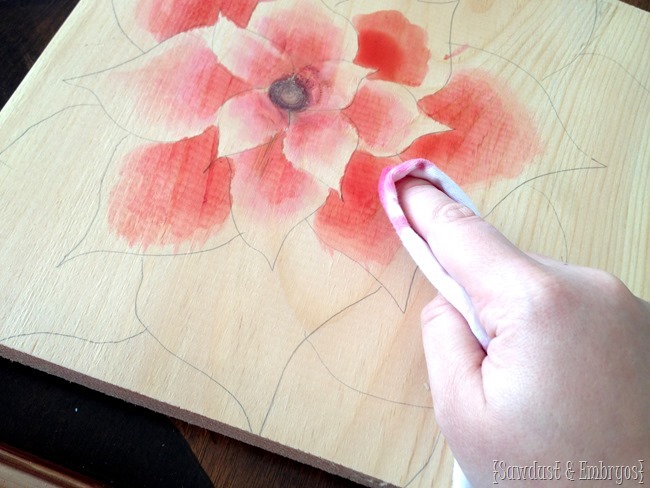 When I realized that it might really work, I started snapping a few process pics with my phone. Staining with juice was VERY similar to wood stain. It’s a little more watery, so the color isn’t as concentrated. I ended up going back and dabbing some more stain at the base of each flower petal to add more contrast.

I have to admit, I wasn’t putting a ton of effort into making it perfect. I was mostly just experimenting with a new medium. So the final flower was a little globbier than I would have liked. But in my defense, it took me about 10 minutes start to finish. Haha!

At this point, I was feeling pretty proud of myself for thinking of such a unique idea. I made a little collage on my phone and posted to our Facebook page. Then I forgot about it until I checked my computer later… and that image had 600 likes, and 280 shares. Holy crapola! 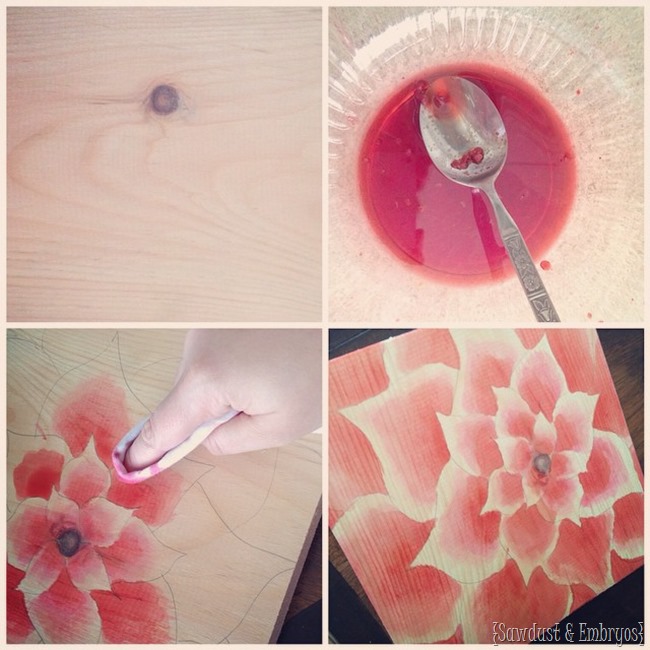 If I had known it was going to go viral, I definitely would have spent more than 10 minutes on it. But at least I know it works and I can reproduce it whenever I have a bag of frozen raspberries lying around.

I liked it enough to whip up a chunky white frame and slap it on the wall in the girls’ room. 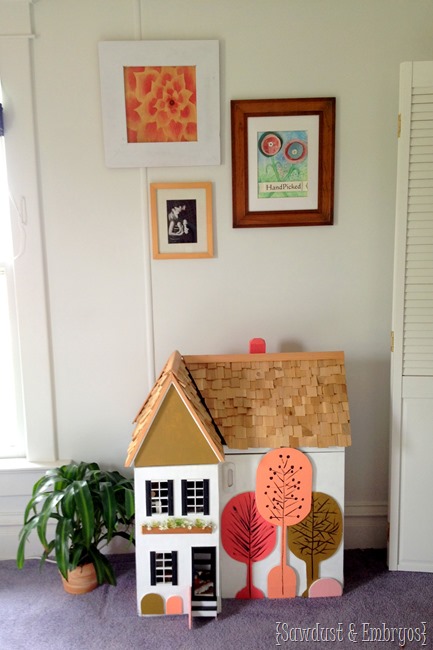 I waited several days before I sealed to make sure it was fully dry. The wood was pretty saturated when I was ‘staining’ it. And since raspberries aren’t oil-based, the poly wouldn’t have stuck. 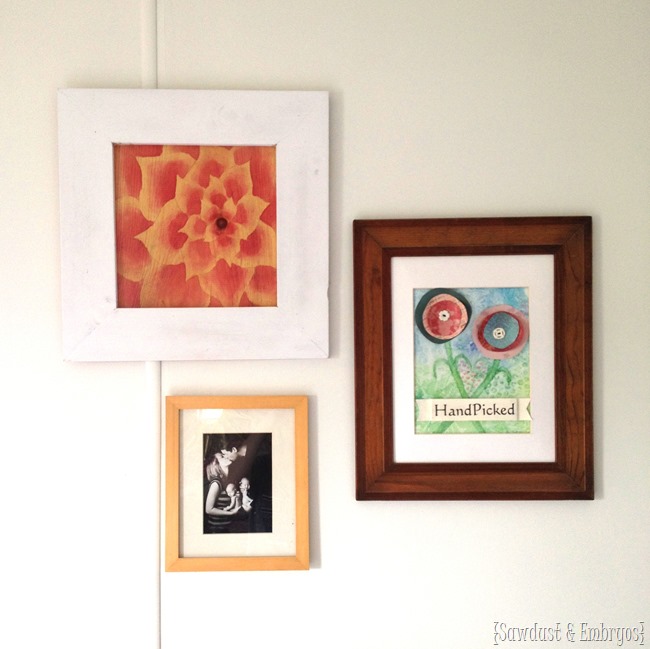 {Mixed media art by my mom, and photograph taken by Molly Long}

I’m not gonna lie, the girls’ room is my FAVORITE room in our house by far. 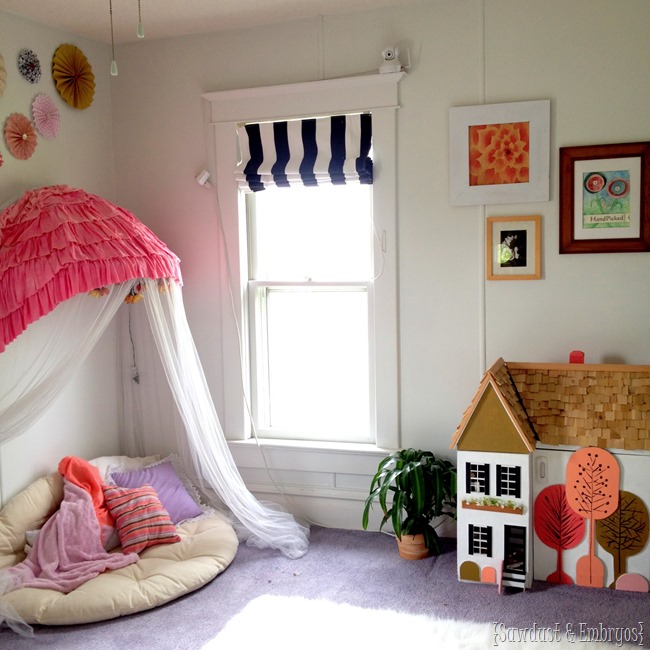 Sometimes I look at all we did, and I think ‘how did we have the time?’ …everything but the dresser was built from scratch. The fainting couch / toddler beds were by first build! Annnd my first real upholstery job! 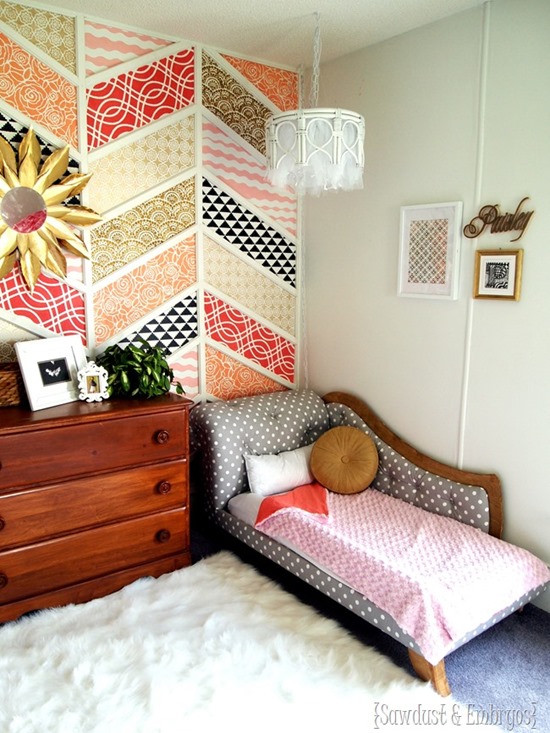 Speaking of shared rooms, what are your thoughts on 3 little girls sharing a room? I grew up in a large family and neverrrrr had my own room. And I loved it! Sleeping alone would be so lonely! But Nick always had his own room and thinks it’s a CRAY idea to have all 3 girls in the same room (once Cypress is no longer a baby of course) when we have the space for them to have their own. I personally would like to have a guest room again… HAHA! Thoughts on this matter?

If you’re not already familiar, come browse through all the DIY projects we did in the twins’ room!

« The kitchen is no longer teal
Chocolate Mousse BROWNIES! »