This has been ONE OF THOSE PROJECTS. The kind where on multiple occasions, we look wearily at each other and telepathically say ‘what were we thinking?’ …because we don’t have the energy to actually say it out loud.

We left you last time at this point: 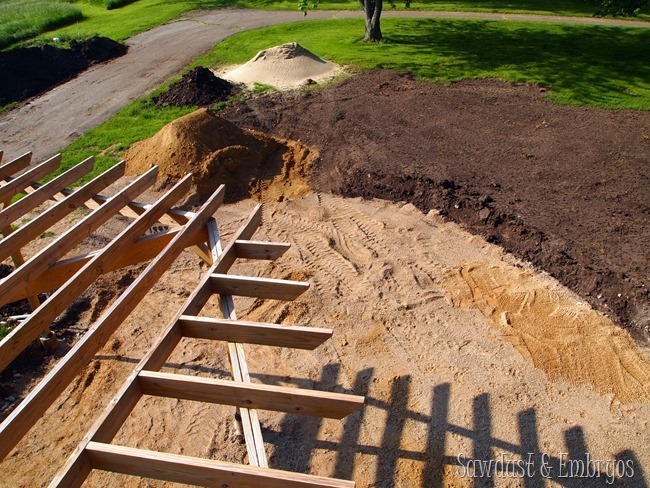 Nick is such a hard worker… and actually ENJOYS this kind of stuff (to a degree), so I lucked out there for sure.

Since we already had the base level gravel laid, the next step was to lay the medium gravel. This layer needs to be LEVEL… with a slight grade for water run-off. This process is accomplished by doing small sections at a time… laying out two 2×4 pieces of wood parallel to each other. We used a level to make sure they were both perfect. If they weren’t, we used a rubber mallet to tap ‘er into place. 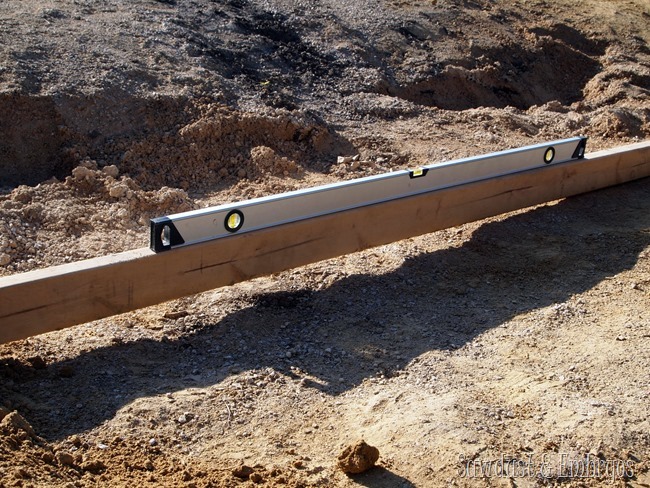 One the two boards were in place and level, we just began filling with the sand! This involved filling the wheel barrow with sand and hauling it to the site and dumping it. Then just rake the sand till it’s somewhat level. 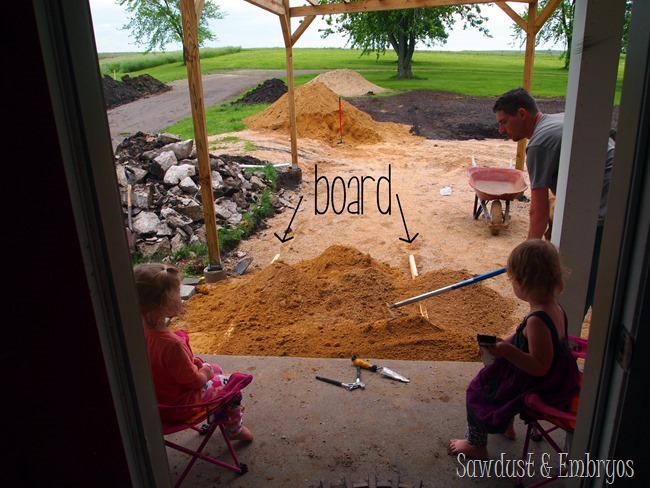 Now that we have this area filled with sand, we take a 3rd 2×4 piece of wood, and slide it along the other two pieces to flatten out the sand and pull off any excess.

The next step is to ‘tamp’ the sand down. A Tamper is basically just a heavy weight to pack the sand down. Once it’s packed down, we add more sand and then repeat until the sand is very pack and perfectly leveled with the 2×4’s. 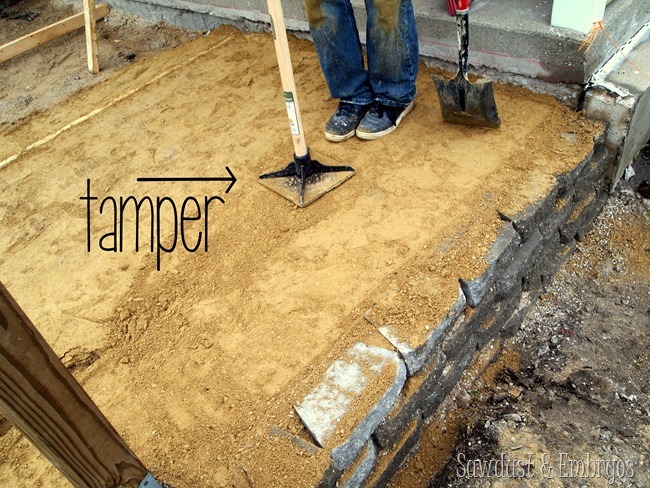 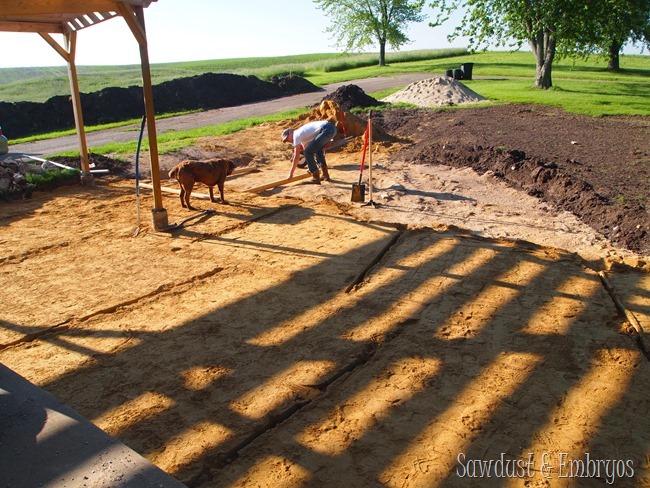 The girls were a HUGE help. (not) 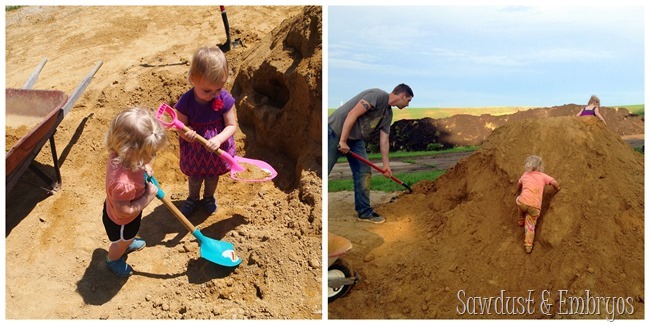 One that ENTIRE LAYER of sand is done, it’s time to roll out the landscaping fabric.

Guess what’s next?! PUT 3 MORE INCHES OF LEVEL SAND ON EVERYTHING. People… this is when it started getting old. 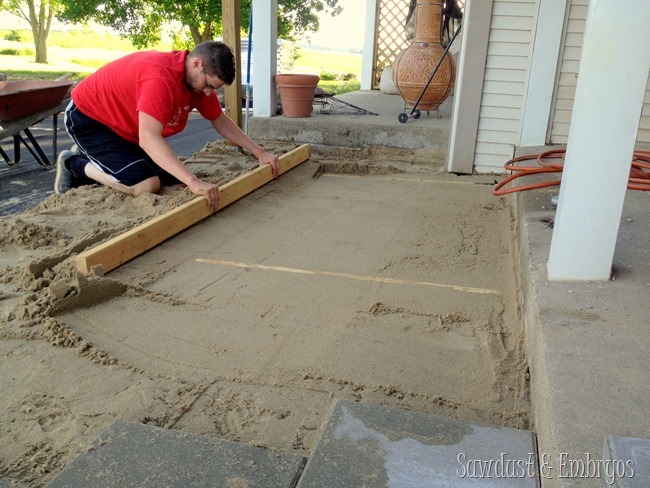 We found that once the sand was level and tamped, it was nearly impossible to keep the children and animals from generously offering their footprints. So with each section of sand, we would slap on the pavers afterwards. This also helped make it feel like the end was near! 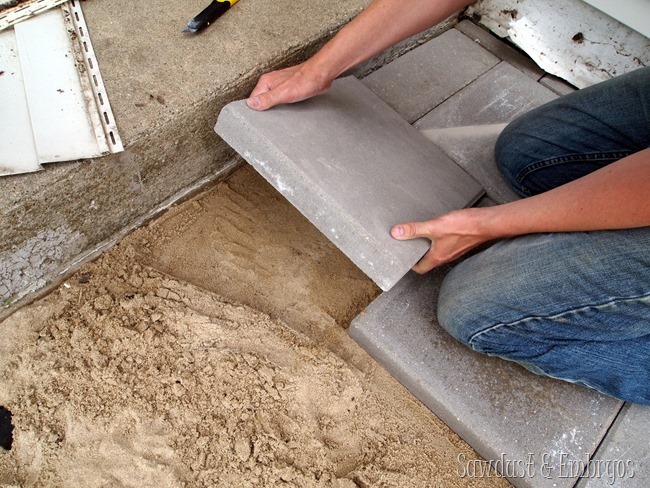 Since our patio is so giant, we went with simple 16”x16” square pavers and alternated them (like bricks) for a little interest. Inevitably, there were pavers that needed to be cut to size along the edges and around the pergola posts. We accomplished this by using a grinder and scoring all the way around the paver. Then it was only attached by a very thin strip in the middle, and we could just tap off the chunk with a rubber mallet. It’s a fool-proof method! 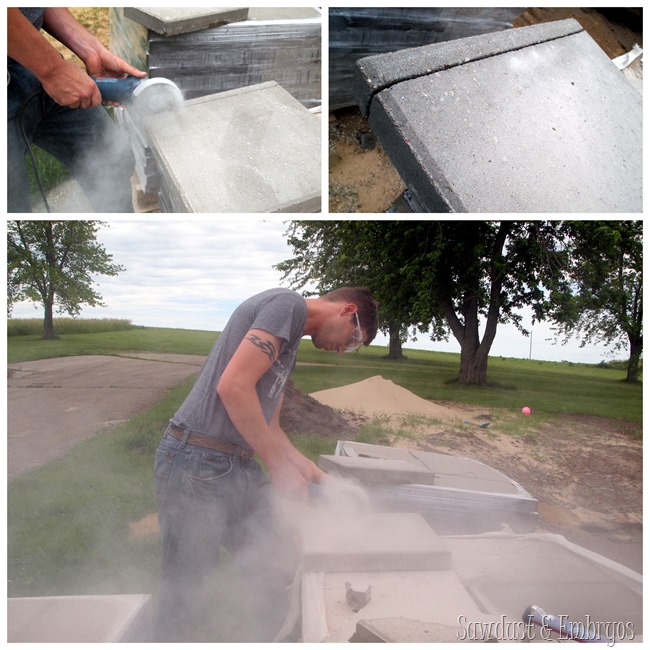 After over a month of this madness, it was exciting to see the pavers go in and begin to picture the finished product. 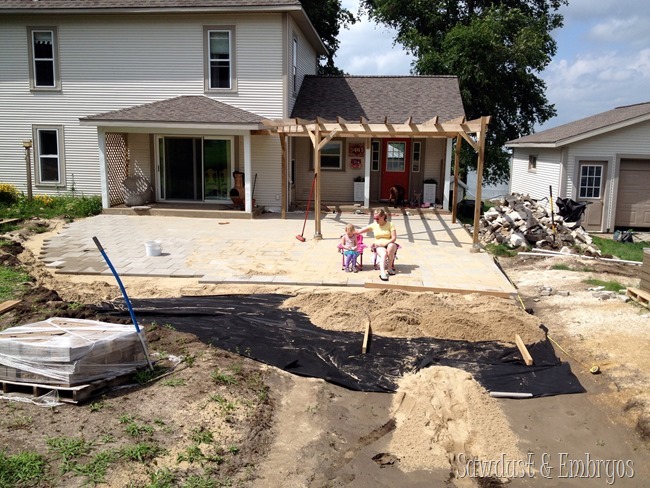 Now that all the sections are complete, the final step is to round off all the edges of the pavers… since our patio is a ‘half-circle’ just like the pergola. I held one end of a tape measure at the corner of the patio while Nick held the other and dragged it along the rounded edge, drawing with a pencil. 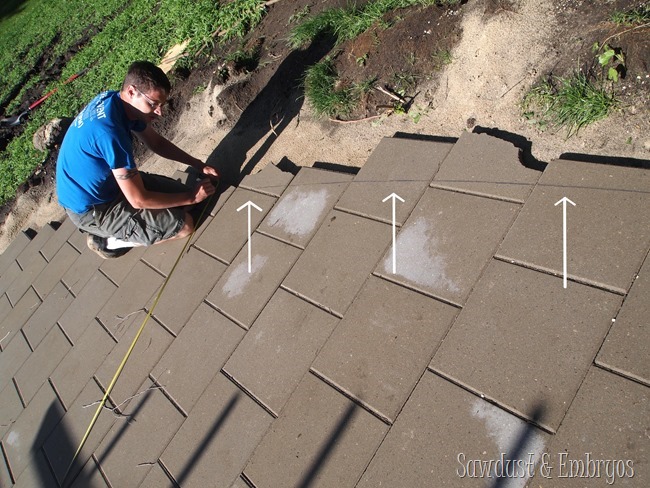 Then we just used the same method to cut them with the grinder. This process actually went pretty fast! 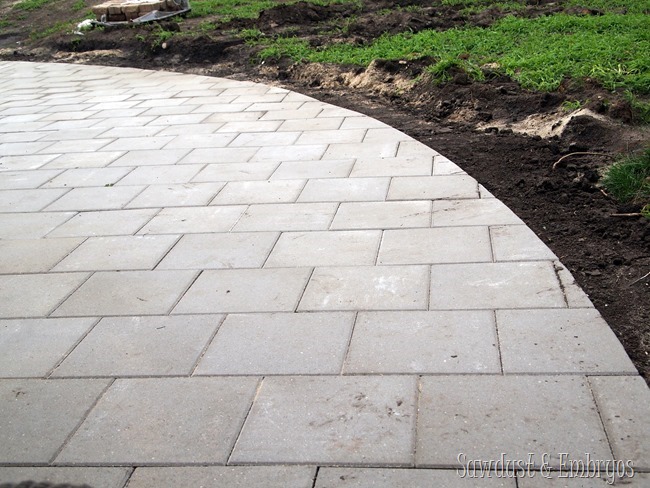 And the patio is FINISHED! Hallelujah! The following pic is hardly an ‘after pic’… because we still have a LOT of other things we plan to do. But you get the idea. We even laid out where the fire-pit is going to be! 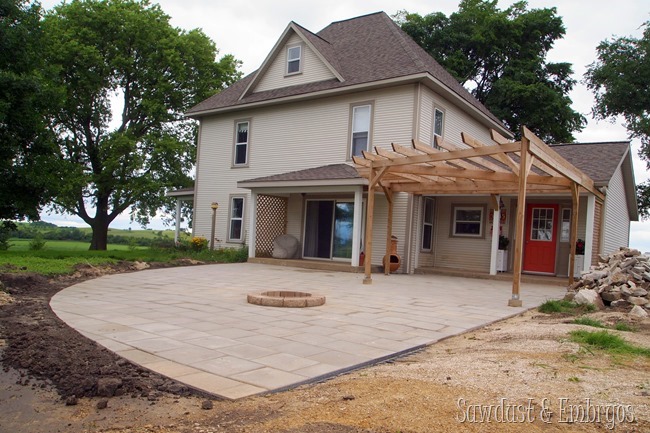 Things we still need/want to accomplish are: 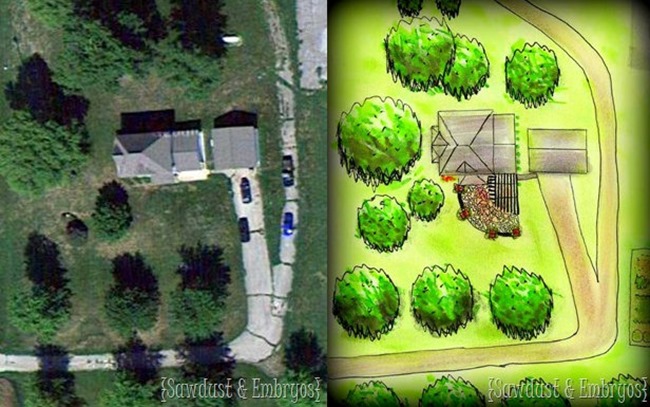 But for now, we’re just basking in the glory of the hard part being done. And rest assured… we’ll be taking a BREAK before doing another damn thing. Check out this before/after shot!

And for reference… here’s a VERY ‘before’ shot. 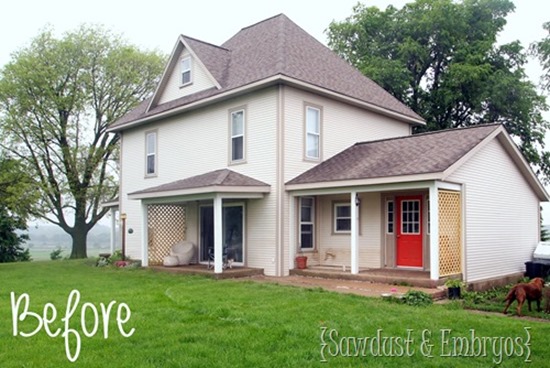 It would be an epic understatement to say that this project was more work than we thought it would be. But now that it’s done, it feels soooo worth it. Can’t wait to start accessorizing and make it feel all homey and welcoming! 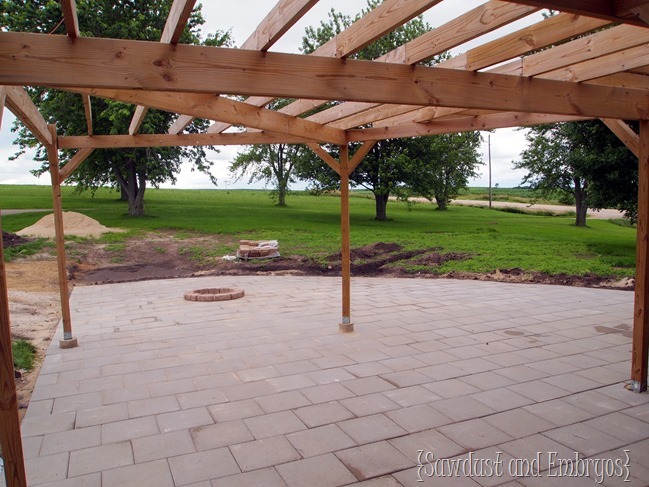 Who’s up for a potluck?!

Be sure to check out all the other projects we’ve done to spice up our entry and improve curb appeal!

Disclosure! we’re SUPER HONORED to have been chosen as a “Lowes Creator”, and were provided with a Lowes gift card to HELP with the cost of supplies… but as always, all ideas, thoughts and opinions are 100% our own. Because that’s how we roll yo.