If you’ve been following our InstaStories (which you FOR SURE should be), you know that progress at the new house has been painfully slow. Since the ‘kitchen project’ has been delayed for so long due to rain and flaky contractors, Nick and I have been busying ourselves with things like wallpaper removal, painting, stenciling, and removing stair carpet… which, as it turns out, has some tricks that make it much easier. So that’s what we’re sharing today!

Here’s a reminder of what our entryway looked like when we moved in! 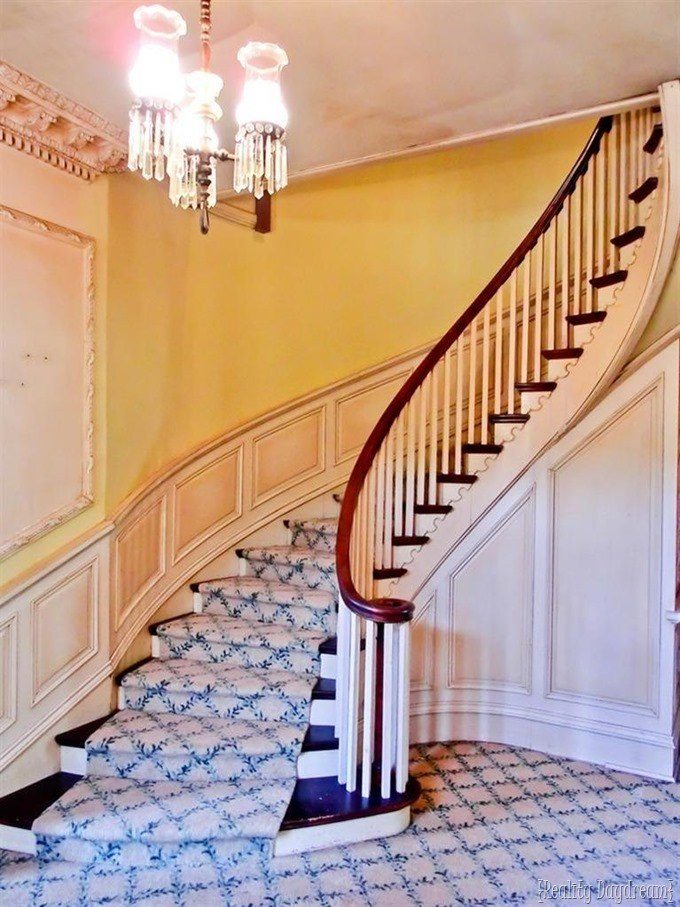 Obviously, it has it’s strengths. HAHA! What am I saying?! It’s amazing! The view of this curvy staircase right after walking in the front door was enough for me to sign on the dotted line right then and there. And before even seeing the rest of the house!

But the stairway needs work, much of which is structural since the railing is pretty wobbly. But the actual stairs are in good shape. The only problem with them is that they’re cloaked with old icky carpet!

We started out by taking out all the carpeting that’s on the floor in the entryway. Luckily the carpet didn’t continue into any of the entryway’s connecting rooms, so it wasn’t a huge task. 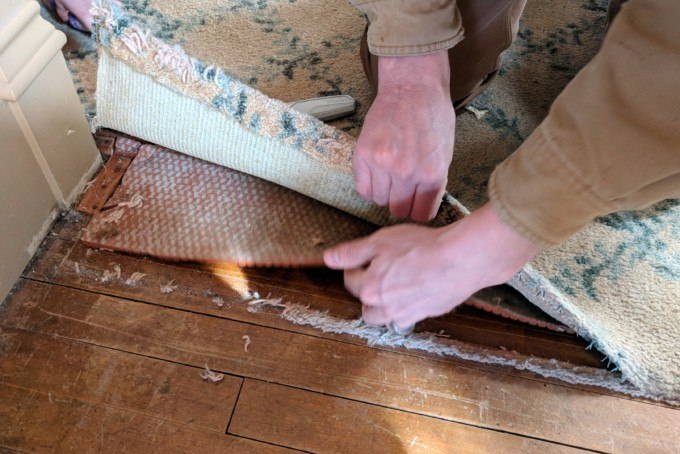 Shortly after taking the above pic, we realized that a trip to the home improvement store for some gloves were in order.

And since we’re talking about safety measures, we might as well chat about all the handy items that made the process of removing stair carpet remarkably simple!

After tackling the carpet on a few stairs, we learned some things and got into a rhythm. We found that the best method was to start out by slicing the carpet down the middle of the tread lengthwise with your carpet knife.. You don’t want to go all the way through the carpet and scratch the wood beneath, so be sure to hold one side of the carpet up with your hand while you cut. 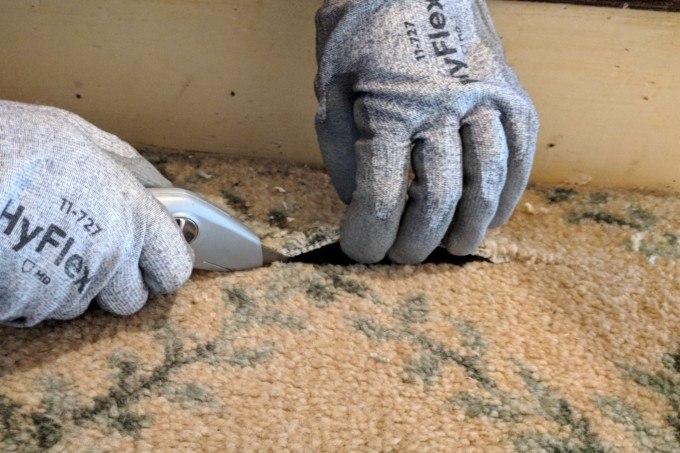 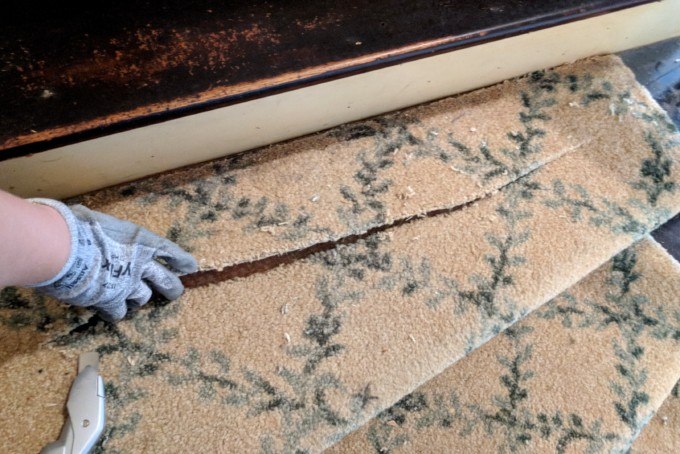 After you’ve sliced your carpet from end to end, use your tack lifter (basically a tiny pry bar) to pull up an edge. You may need to use your carpet knife again after the corner is pulled up so you can pull that whole strip of carpet up. 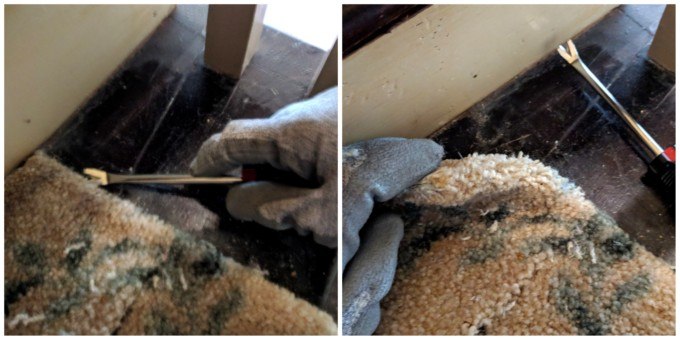 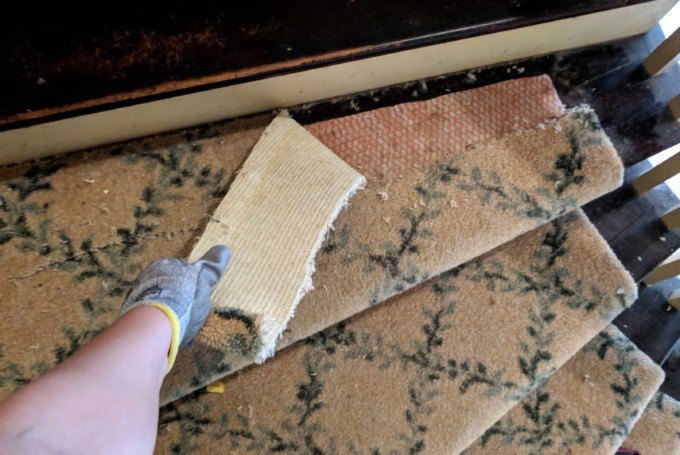 Once you’ve got that first strip of carpet pulled back, it’s so easy to pull back the rest of it! 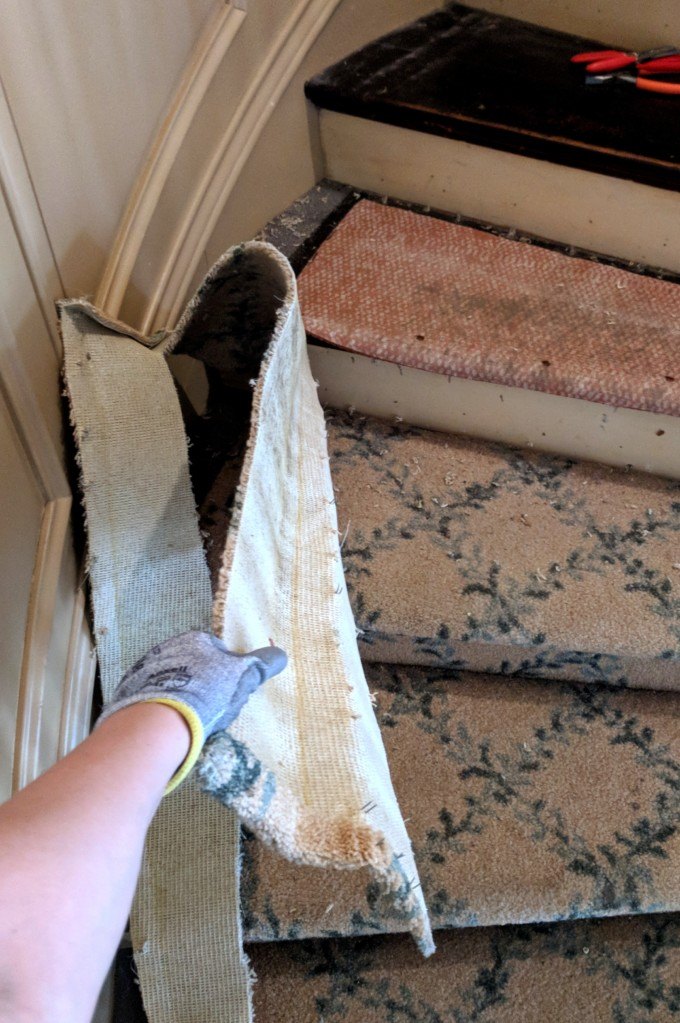 At this point, the carpet pad is just laying there and can just be lifted off! 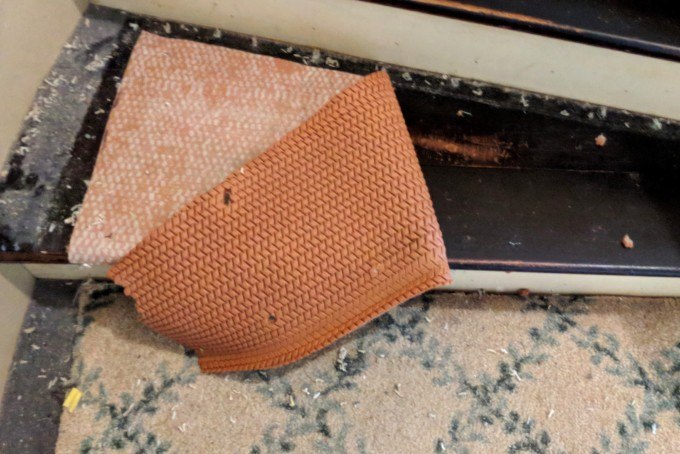 Now, all that you have left is pulling out a meeeeellion staples. Just kidding, it actually wasn’t that many per stair. In addition to using the obvious pliers, we loved using wire strippers because they hook around that staple like nobody’s business! 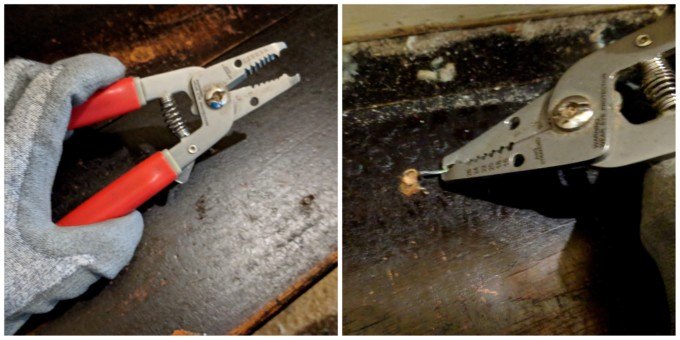 Put on a podcast or blast Pandora, and pull those suckers out one by one! 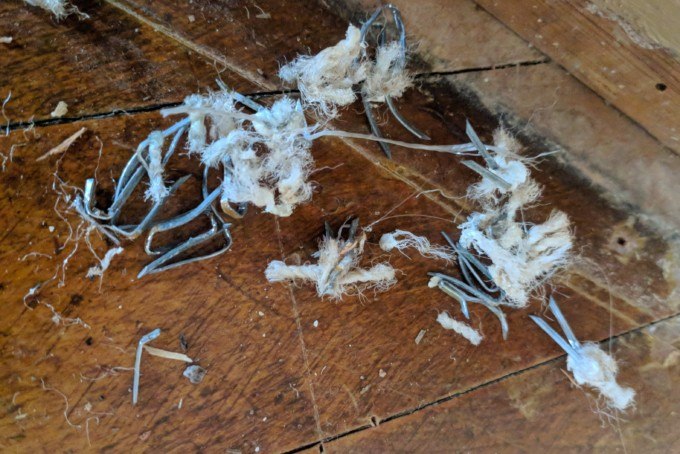 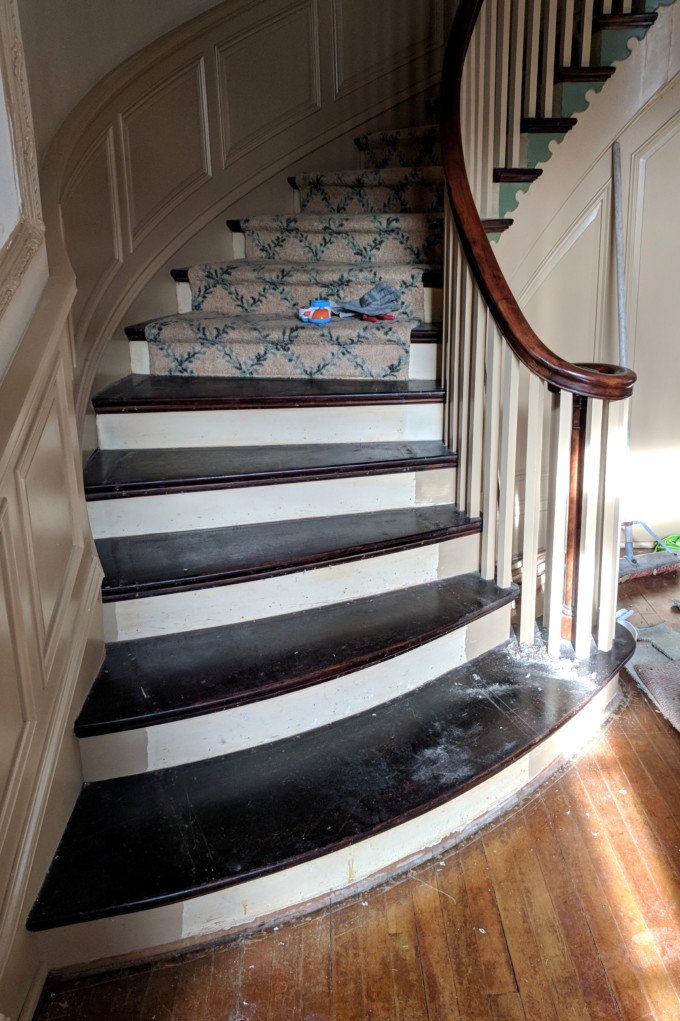 We had 20 stairs in all, and we worked on it here and there until it was done. So it’s hard to give you an actual timeframe of how much time we spent on this. But I would guess it took about 20 minutes per step. You do the math. Hehe! 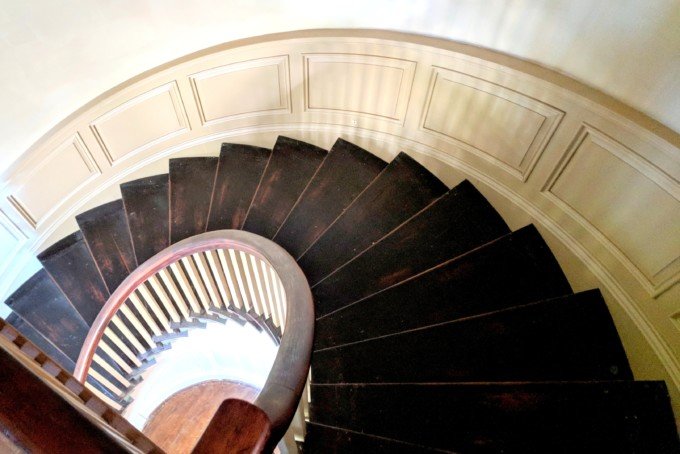 We’ve begun painting (well, technically PRIMING) the entryway, and it looks AMAZING. But we only went so far up the stairs. That’s another project for another day. 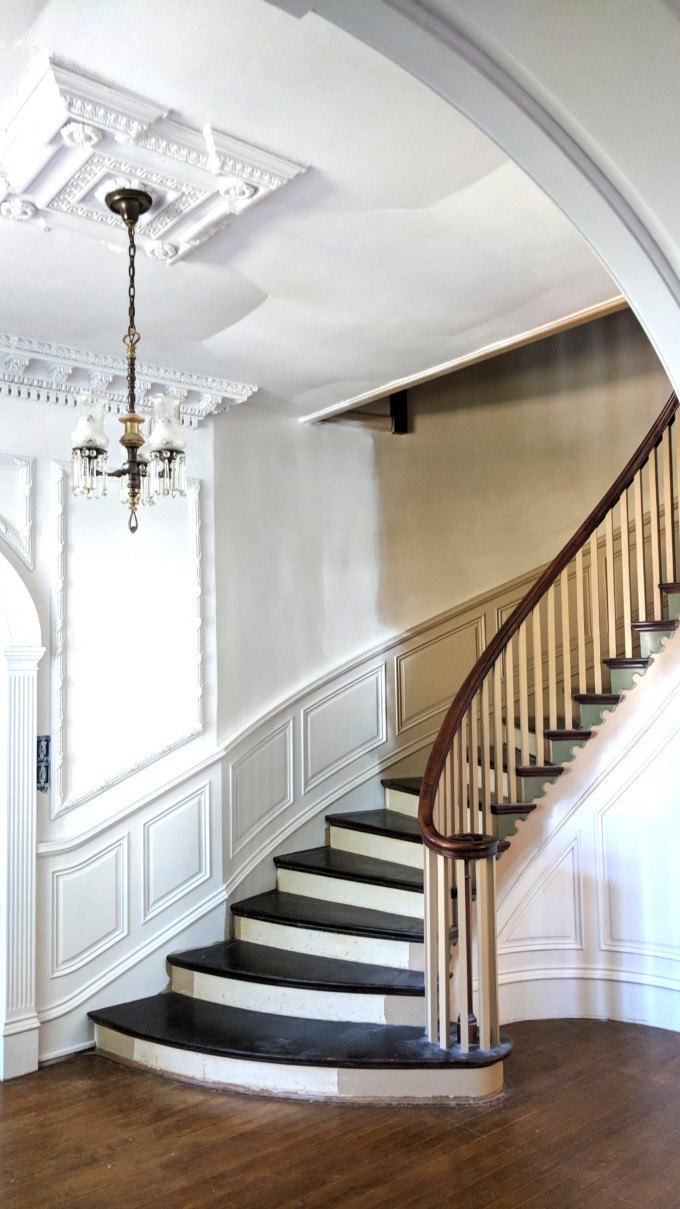 I’m still trying to decide if I want a simple runner on these stairs to help with the LOUD echo-y factor of this large entryway. I’m just really loving it without a runner though, so the jury’s still out. Do you have an opinion? Leave me a comment!

Here are some inspiration pics I’ve pinned over the past couple weeks. There are things I love about each and every one. These decisions are soooooo hard!! Which one is your fave, and WHY? Let’s discuss. 🙂

UPDATE! Below are links to posts that we’ve published about our ‘new’ house and it’s progress! 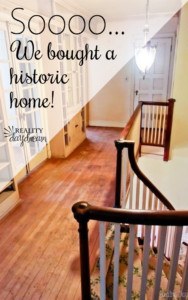 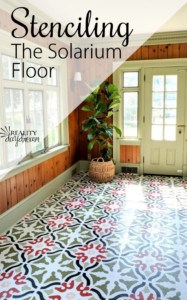 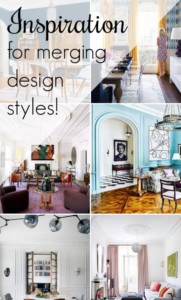 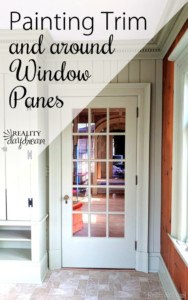 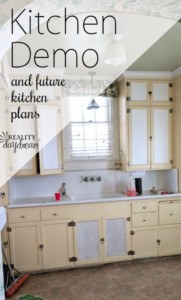 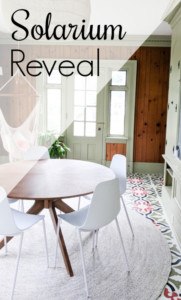 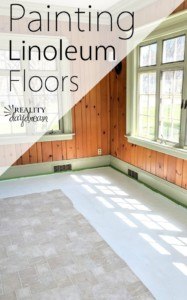 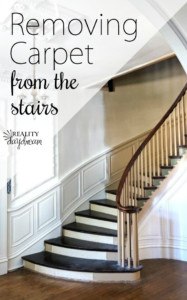 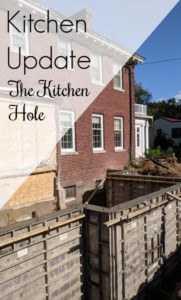 « Reverse Staining Technique
How to Personalize Gifts with Etching »