In it’s place, my fellow twin mama Crystal suggested that I give an account of our experience with Paisley’s Pneumonia and our run-in with the ER on Friday night.

It was evening. Nick was at work. The girls were in bed. 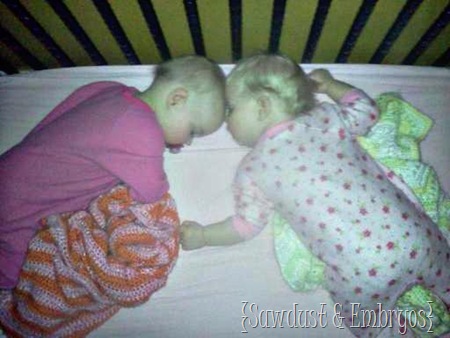 Paisley had been suffering from a cough throughout that day, but was in good spirits… so we thought nothing of it. Tis the season, right?

Through the monitor, I could tell that the girls were sleeping… but I could also faintly hear that one of the girls was breathing very rapidly. I went up to find Paisley quietly laying awake, vigorously sucking her thumb, with a slight fever, breathing like she’d just finished a marathon.

I brought her downstairs to snuggle, took her temp (101.9), and called First Nurse to inquire about her rapid breathing. The nurse was very kind, and instructed me to count how many respirations she had in a 60 second time period. It was 52 breaths… and the nurse told me to head to the ER.

After what felt like 16 hours (but was actually about 3 minutes) he called back. All I needed to say was ‘you need to come home right now’ and he was on his way.

He stayed with sleeping Delly while I took Paisley to the nearest town. I walked up to the counter in the ER with a pajama-clad, clearly-ill child in my arms… and nobody was at the counter! IN THE EMERGENCY ROOM!

Five minutes later, a lady came out and held up her index finger… indicating that I would need to wait even longer while she finishes up what she’s doing. SO classy if you ask me.

I spent the next 3 hours doing the following: 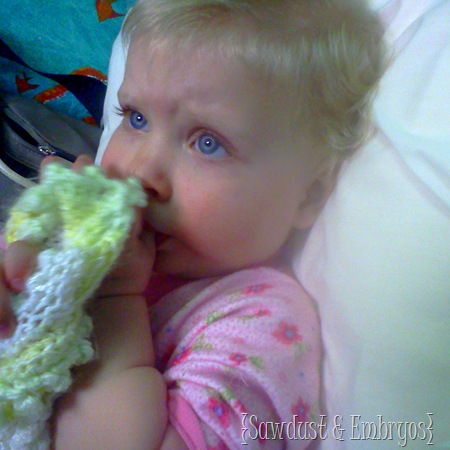 Finally, at 2 in the morning, I loaded up my sick child in the cold vehicle to drive home at last.

Then the gas light came on in the Jeep.

Girlfriend was such a trooper throughout this whole ordeal, and has remained in good spirits throughout the whole infliction thus far. She’s had a better attitude than I did, that’s for sure!

She’s been on an antibiotic for 3 days now, and has almost made a full recovery! We were lucky enough not to have to put her on a nebulizer treatment, and we’re so grateful for that! She still coughs on occasion, but nothing close to how it was over the weekend!

You were all so very sweet with all the comments of encouragement when I shared it all on our Facebook page. It’s not just everybody that has a huge loving cheering squad like we do.