Many of you have been requesting a pregnancy update. (If you missed our ‘announcement video,’ see it HERE). With that being said… for some, I know it’s the last thing you want to hear. We’ve accumulated quite the following of fellow infertile women, who email their stories and share their sorrow. It’s been incredibly encouraging and uplifting through this journey to know that we’re not alone. And therefore, I’ve been torn about how much to share on the blog regarding our impending family. And although everyone has been overwhelmingly happy and encouraging, I know there are some who cried themselves to sleep the night we announced that we’re pregnant with twins. It’s been an incredibly hard road for us, and we wouldn’t wish it on anyone. But at the same time, it’s finally our turn! And we want to shout it from the rooftops! …While being as sensitive as possible to those still struggling with infertility. Because the fact of the matter is: I’m still infertile. We just did things manually… to the tune of $12,000… which we saved, and paid in cash.

So to those who don’t want to hear it, I completely understand… and encourage you not to read the rest of this post. No hard feelings here. Believe me. If it were the other way around, I would have already blocked you on Facebook.

Phew! I’ve been putting off that convo for quite awhile! But on to business. Yesterday was our second wedding anniversary… which was wonderful. Nick made me heart-shaped pancakes for breakfast, and we wandered down to Des Moines for dinner (Olive Garden) and a movie (The Tourist) and finally, our second ultrasound!! What could be a more perfect way to celebrate two wonderful years?! As well as the two lives that are rapidly growing inside me! After all that we’ve been through, there are times when I get a little anxious that everything might not be okay with the babies. So an ultrasound is a special treat! Hearing their heartbeats, and seeing them wiggle. Best thing EVER.

For what it’s worth, here’s an ultrasound photo. They kinda just look like blobs, but they’re MY blobs, and I love them. 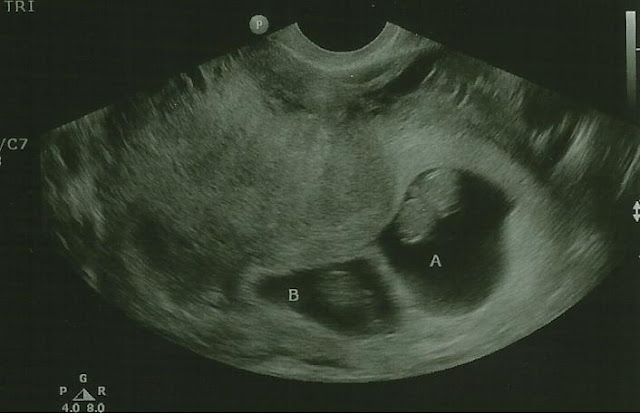 How am I feeling? Why thank you for asking! At 9 weeks, I’ve managed to evade morning sickness so far. I get queezy from time to time, mostly when I’m hungry or really full. But for the most part, I’m just TIRED. Super super tired. I could sleep anytime, anywhere. Which isn’t the worst thing ever. And I’m certainly not complaining about any of my pregnancy inconveniences. I really enjoy the whole process actually, and look forward to all the discomforts that come with this HUGE blessing(s)!

I can’t button most of my pants, which may very well be a consequence of holiday food intake. But I like to think it’s baby belly. According to Babycenter.com, this week the kids are roughly the size of a grape, complete with arms and legs, eyes, ear lobes, mouth and nose and sex organs!! Though we won’t know the sex for quite some time, I hear.

Which brings me to another question many have been asking… YES, we’re going to find out the gender of our little ones ASAP. We’ve had enough surprises when it comes to childbearing in general, we don’t need to be surprised by their sexes. Besides that, I feel like I’ll be able to bond with them more if I know… that probably sounds ridiculous. We haven’t talked about whether or not we’ll be making it public knowledge on the blog, but I don’t see why not.

There’s lots of pressure to have a SUPER cute nursery… which I hope to accomplish. But I’m not allowing myself to start planning until we know if they’re boys or girls (or a combination of the two).

I think that pretty much covers it for today! I’m gonna go take a nap!  🙂