I have great news! Our girl Delly is crawling! She just decided one day last weekend that she could, and hasn’t stopped since! She’s not quite as fast as Paisley, but she follows behind and they parade through the house like little ducklings pitter-pattering around. Crazy cute. Occasionally they stop and babble to each other, and then erupt into laughter at each other. If only I could crawl into their minds and know what’s so funny.

Paisley’s been getting brave, and letting go when she’s standing from time to time. Sometimes she even stands up for 8-10 seconds at a time! And she’s SUPER proud of herself when she does this. It won’t be long now. I wonder if she’ll be walking by their first birthday! Only two more weeks!!!!! Ahhhhh! Crazy!!!

This was the very first picture I took today… which was good, cause I didn’t keep their attention for long. I’ve gotten desperate, and have humbled myself to putting a burp cloth on top of my head and over my face, and whipping it away playing peekaboo to get them to smile for a brief second. Long enough for me to snap one good pic! 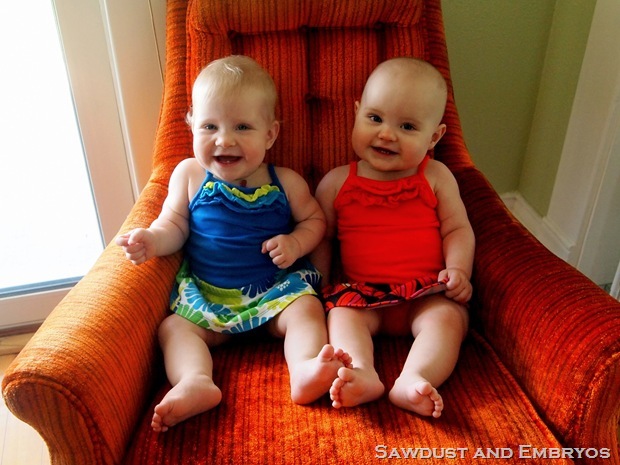 They’re delightful in every way.