Yesterday I and the girls went grocery shopping together for the first time! I had put a lot of thought into the logistics of this, including reading twin books on the topic and talking to other twin moms. The most common idea included having two carts, either with both babes being pushed in one cart, with the cart of groceries being pulled behind (which sounded awkward and difficult to maneuver), or having two carts with a carseat on each… equally awkward. Another idea is to just take the double stroller, and only get enough groceries that would fit in the bottom compartment thingy, and we all know that wouldn’t work since we only shop for groceries once a month. So I decided to ‘wear’ one baby in the Bjorn, and have the other baby in her carseat on the top of the cart. It worked swimmingly! Adelyn was in the Bjorn (cause she’s lighter) and Paisley in the carseat… and they were such good little girlies the whole time! Adelyn slept, and Paisley played and smiled charismatically at all the curious onlookers. There were a lot of double takes when people realized that there were TWO BABIES. Could it be? *gasp* And we went through all the questions with each excited person. In addition to all the typical ‘twin questions’, most people’s first reaction is “Double Trouble!” or “YOU’VE got your hands full” … but yesterday, one elderly lady said “awww, aren’t you such a lucky mommy to have two babies! Double blessing!” I said, “THANK YOU for saying that! They ARE a double blessing!”

It was a sight to see when my cart was overflowing with a month’s worth of groceries and me with the two babies. I almost asked someone to take a picture so I could show you all how obnoxious it looked. But that just felt weird, so I didn’t. 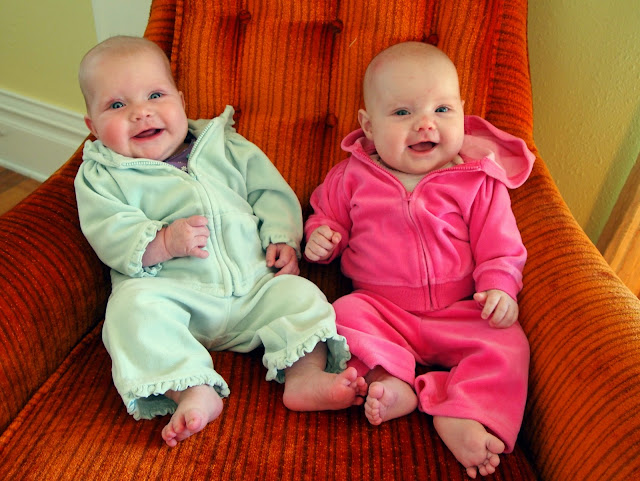