Ok… I love color, but I love PATTERN too (as you know from our kitchen wall, china cabinet, and our baby changing table! And I always see different patterns being used in design, but when you go to search for other examples of that pattern, there’s no way to find it without knowing some design ‘lingo’. And even after tons of searching on the internet, there’s not a single source that offers examples and names of all the patterns out there! So I set out to make one for myself. It may not be an exhaustive list of all the patterns known to mankind, but it’s some more common popular ones… many I didn’t know the name to until now! I’m loving Quatrefoil and Ikat designs lately, which I’ve heard of before, but wouldn’t necessarily be able to think of when it comes right down to it. 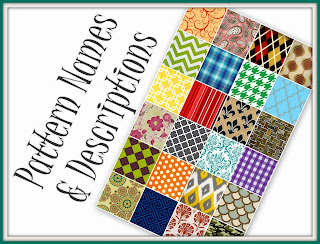 So below is the collage I made of 27 patterns! This is a good one to PIN so you can reference it in the future! And below I gave brief descriptions of each pattern for fun!

Scroll: resembling a scroll in shape; a spiral or convoluted form in ornamental design derived from the curves of a loosely or partly rolled parchment scroll.

Paisley: a droplet-shaped vegetable motif of Persian and Indian origin. The pattern is sometimes called “Persian pickles” by American traditionalists, especially quiltmakers, or “Welsh pears” in Welsh textiles as far back as 1888.

Argyle: a geometric knitting pattern of varicolored diamonds in solid and outline shapes on a single background color. Argyle is a branch of the Scottish clan of Campbell, from whose tartan the design was adapted in 1899!

Ogee: an onion-shaped motif. An arch formed by two S-shaped curves meeting at a point (partly concave and partly convex).

Chevron: a V-shaped pattern, especially a kind of fret used in architecture or military insignia. Also called dancette (an ornamental moulding having a zigzag pattern), similar to Herringbone.

Plaid: checkered or tartan twilled cloth, traditionally made of wool.

Houndstooth: is a duotone textile pattern, characterized by broken checks or abstract four-pointed shapes, suggestive of a canine tooth. Typically used in cloth for jackets and suits.

Moroccan: a type of leather made from the skins of goats, sheep, or seals, having a pattern of irregular creases.

Gingham: originated in the Malay language as a fabric woven into checked or plaid patterns (often blue and white).

Stripes: a textile pattern of parallel bands or lines on a contrasting background. Pinstripe being a subcategory!

Polka Dot: consisting of an array of filled circles, generally equally sized and spaced relatively closely in relation to their diameters. In 1854, the pattern was named for the dance of the same name, making one suspect there is a connection linking the pattern to the dance.

Floral: decorated with or consisting of flowers or patterns of flowers. (DUH!) 🙂

Damask: woven with one warp yarn and one weft yarn, usually with the pattern in warp-faced satin weave and the ground in weft-faced or sateen weave. Is derived from the city of Damascus and dates back to the Middle Ages.

Quatrefoil: a representation of a flower with four petals, or a leaf with four leaflets (such as a four-leaf clover). It is sometimes shown “slipped”, i.e. with an attached stalk. However, it is not defined as a flower, but called a “foil”. Commonly seen d in Gothic Architecture.

Basketweave: an all-over checkered weave pattern resembling that of a woven basket, commonly found in baskets and created from interwoven lengths of natural or man-made materials.

Trellis: a structure or pattern of interwoven strips of wood, especially one used to support climbing plants.

Bead and Reel: an architectural motif, usually found in sculptures, moldings and numismatics. It consists in a thin line where bead-like elements alternate with cylindrical ones. Common in Greek and Hellenistic cultures.

Checker: a pattern consisting of crossed horizontal and vertical lines forming squares. Derived from the ancient Persian word shah, meaning “king”, from the oriental game of chess, played on a squared board.

Ikat: a manual weaving style that involves resist dyeing the warp or weft threads before the fabric is created. Originating in Southeast Asia, ikat fabrics can be extremely ornate and intricate, often featuring detailed designs or larger pictures.

Fleur De Lis: a stylized lily or iris that is used as a decorative design or symbol. Appeared in artwork from the earliest human civilizations.

Palmette: a classical motif based on a stylized radiating, fan-shaped palm leaf commonly found in Greek, Egyptian, Assyrian, and other ancient art.

Lattice: A structure consisting of strips of wood or metal crossed and fastened together with square or diamond-shaped spaces left between.

Camouflage: fabric dyed with splotches of green and brown and black and tan; intended to make the wearer of a garment made of this fabric hard to distinguish from the background.

Vermicular having the shape or motion of a worm. (YUM!)

My current favorite is the Ogee Pattern, which I NEVER KNEW it was called that! I love how it’s funky and 70’s-ish. Here are some really cool examples of it! I’m thinking of using one of these patterns in the living room above the board and batten! What do you think? 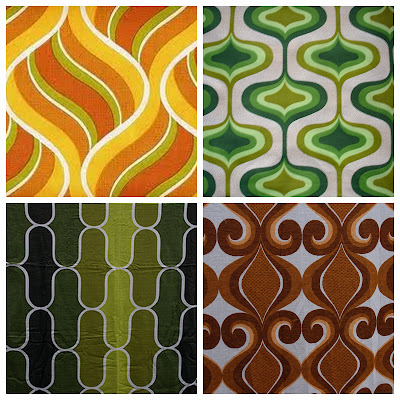 Definitions were the result of lots of research using various Interior Design Textbooks, and websites like www.thefreedictionary.com and www.artlandia.com.

Don’t forget to PIN for referencing!