This past week has been… well let’s just say more challenging than most. The girls are very busy, in such a way that keeps ME very busy. They seem to be going through a needy stage. Especially Paisley. She’s not having fun with her toy unless I’m WATCHING her have fun. Otherwise she does this extremely loud fake cry, where her mouth is WIIIIIIIDE open, and eyes tightly shut… making a shrill cry loud enough to wake the neighbors. And that says a lot, cause our neighbors aren’t all that close here in the country. Adelyn’s a little less high strung, but still doesn’t like it when I walk out of the room. I like to blame their general crabbiness on potential teething… but in reality, I think the girls are learning the art of manipulation and tantrum-throwing. Happily, they’re still going strong with their night-sleeping-efforts, getting in around 11 hours a night. Their daytime napping has even been above average. It’s just those darn awake hours. Time that they should be giggling and playing and learning, is spent in great distress by all parties. At least they’re still turning on the charm for the camera. 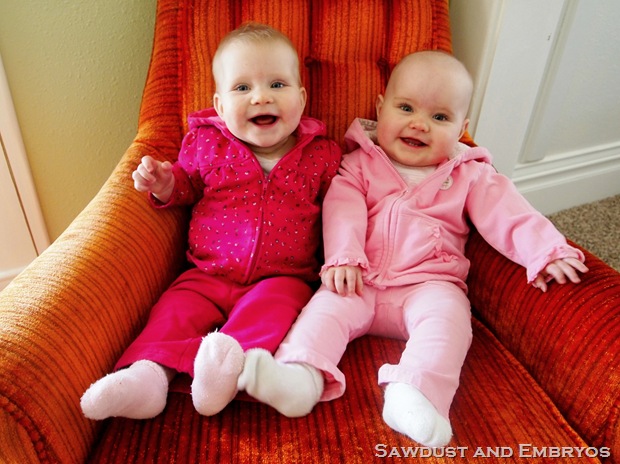 Another new development around here is the frequency by which I sweep the kitchen floor. I used sweep, oh about once a week… and even then it was mostly just grass clippings and the occasional chocolate chip (gasp! what a waste!). But now that we’re giving the girls more and more finger foods, I promise more of it ends up on the floor (or mashed into their highchairs) than what makes it into their mouths.

Seems a lot like I’m complaining today, but it’s just the week I’ve had. Things aren’t always roses around here, and I refuse to pretend like they are! Each new stage has own delights and challenges!

« A perfect moment…
Planting Willows – One for each babe! »