I started with a slew of clear mason jars (most of which I picked up at garage sales here and there)! I wasn’t sure exactly how many I would need for this project, so I threw in some spaghetti jars I had in the recycling bin. For this particular project, it doesn’t matter. They will just be a bunch of broken pieces! 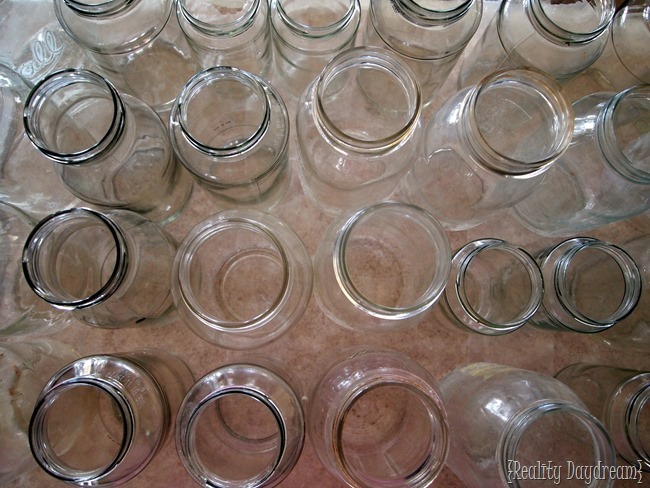 You’ll want to order some of this stuff. It’s called Vitrea 160 I only purchased the dye, but I would recommend getting the thinner as well. Even though it’s water-based dye, I think using water as a thinner may have contributed to some minor drippage. It wasn’t a huge deal, but just something I would try next time.

Now here’s where I have some regrets. If you do this one simple thing (that I thought of too late) you’ll save yourself a MAJOR headache.

BRUSH THE DYE ONTO THE INSIDE OF THE JARS.

I just assumed that the dye was permanent since you ‘bake’ it and since it claims to be dishwasher safe. But that is not the case. It will scrape off. So DO NOT paint it on the outside of the jar. 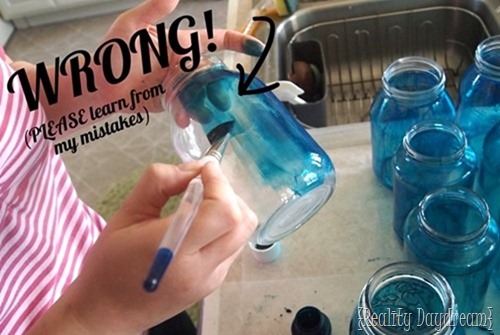 If I had done that simple thing differently, I would be MUCH happier with my project (you’ll see why in Part 2 of this tutorial). Please don’t let this fiasco inhibit you from trying this, because it could be really amazing. Part of being a DIY blogger is making mistakes so YOU don’t have to!

Moving along! Pop those bad boys in the oven! (specific directions on the bottle)… I just let the jars cool in the oven overnight, because I didn’t want to mess with hot jars. 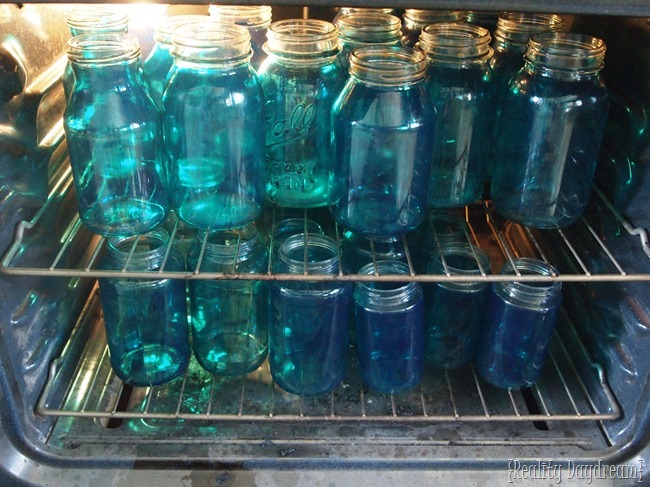 If you’re just dying your jars to use as decoration… you’re done! 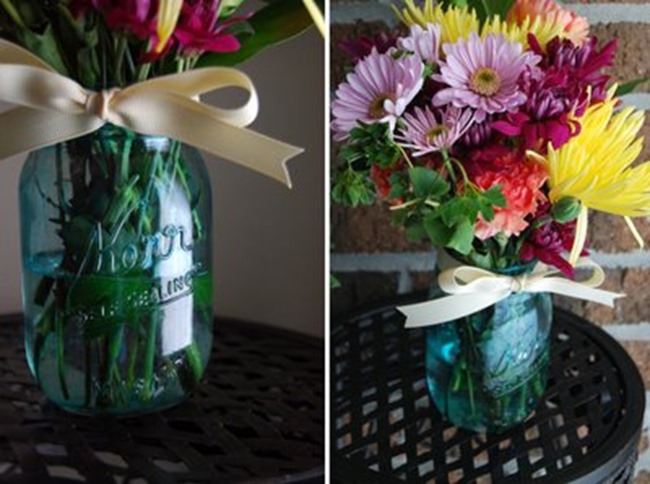 (Mason Jars that were Dyed for Wedding Centerpieces)

But if you’re going the long haul and want to make a killer mason jar mosaic backsplash… READ ON!

I hauled them out to the driveway in a laundry basket, laid out an old sheet, and gathered my supplies: Hammer (baby monitor optional).

I lined up all my jars on the bed sheet… 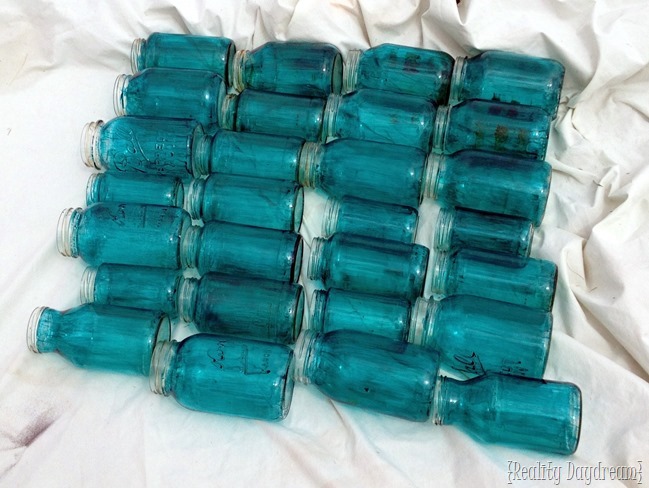 Then covered them with leftover bed sheet (to prevent glass from flying), and started popping them with a hammer! This part is FUN! 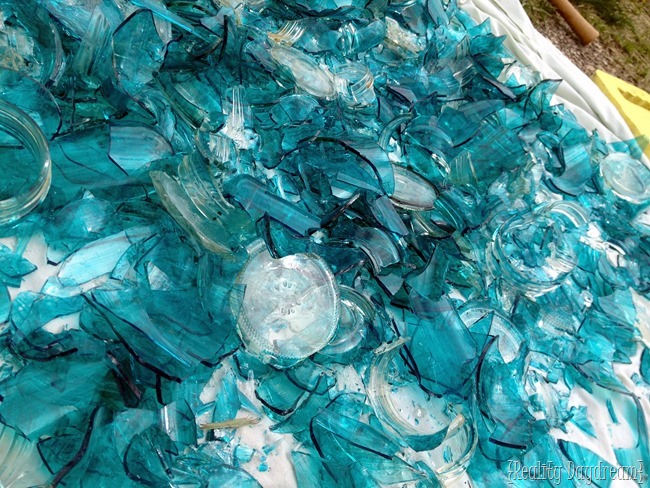 Next, I put on some rubber gloves and started sorting. There will be some good size chunks that need another tap with the hammer. And there will be a lot of pieces you don’t want to use (like the bottoms of the jars and the neck). I had a laundry basket for castoffs, a 5-gallon bucket for the good pieces, and an extra jar to hold all the little shards that need to be disposed of. 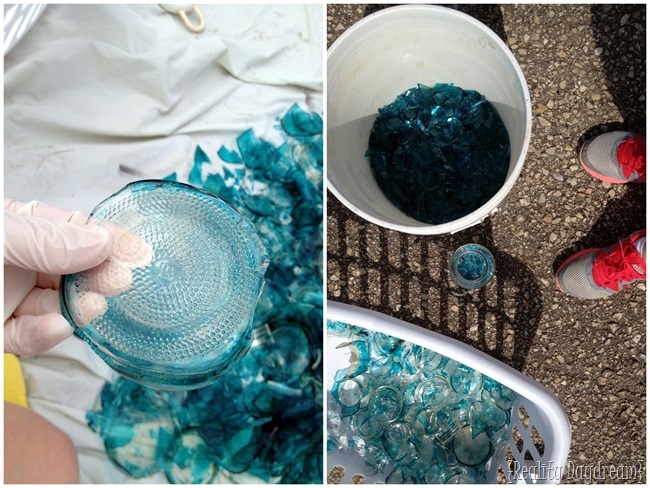 Did you know that when you’re making a mosaic, your pieces are called ‘Tesserae’? You can use broken china, shells, stones, beads… anything (even cut up credit cards! Not THAT’S a conversation piece). There’s your vocabulary lesson for the day.

Check out my sweet Tesserae! 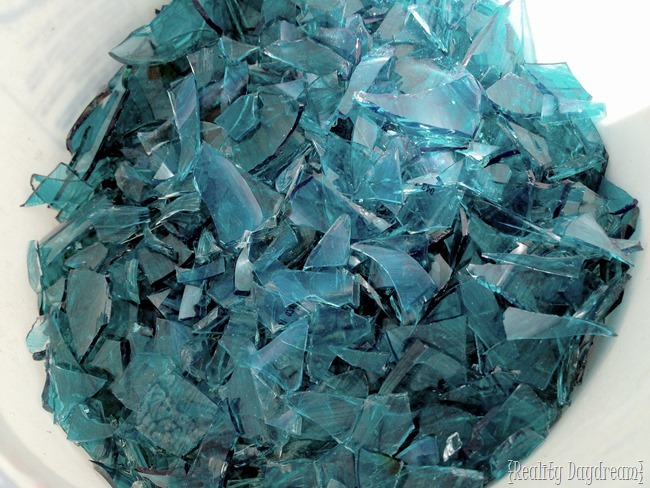 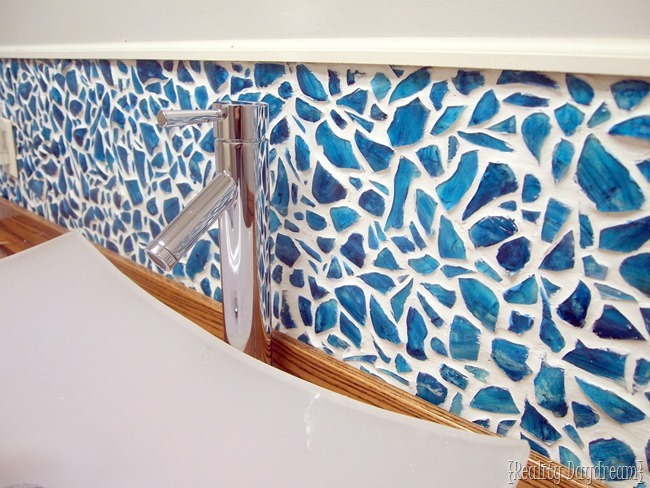 Be sure to check out our tutorial for the DIY Butcher Block Counters! 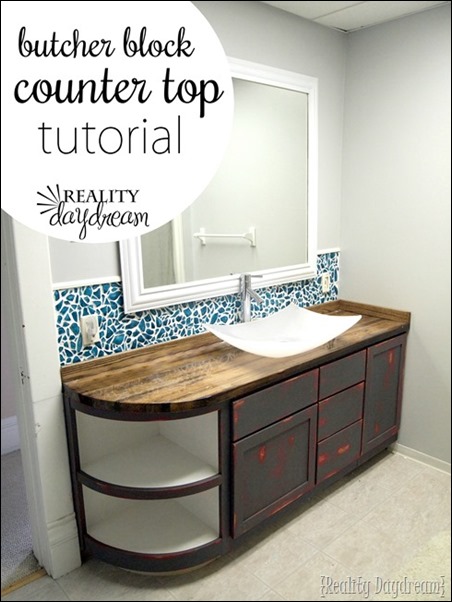 « A fashionable solution to our sleeping sitch
Mason Jar Mosaic Backsplash (for UNDER $40!!) »