Note to self, orange is not the best backdrop color to complement most baby girl clothing.  I thought pink outfits were sketchy, but I put RED outfits on them today… didn’t fly. So we had several wardrobe changes… what else am I supposed to do with my free time?! 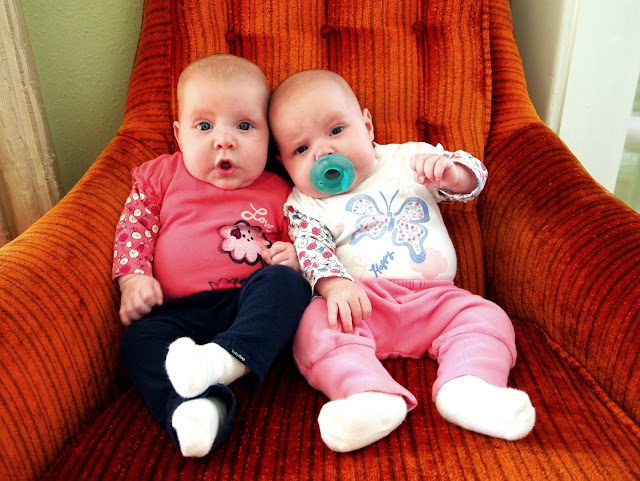 There haven’t been any major developmental milestones to speak of thus far. Still no rolling or reaching for objects… but that’s to be expected since they were 5 weeks premature. However, since the two month marker (when the doc let us quit waking them up to feed) the girls have slept all night. And by all night, I mean 10 straight hours. Both of them. That’s a milestone, right? But it probably won’t last forever, I know.

The girls have begun traveling in the crib, and it makes me nervous that they’re going to get their faces right up to each other and not be able to breath. We’ve begun trying to figure out how to put another crib in that tiny room, or if it’s even necessary. They sleep so much better together… but keeping them alive is the ideal scenario. Twin mommies? Advice?